It is not unusual to run across insects in old books: flies and spiders get squashed in the margins, and paper-loving silverfish perish between the pages they’ve been dining on. However, it is out of the ordinary to find one embedded in a book’s actual paper, as RBML cataloger Linda Bial did recently!

This unfortunate spider evidently fell into the mold where fresh paper was dried during the paper-making process. Paper in the days of handpress books was a precious and pricey commodity, and undoubtedly the printer saw no reason to discard a perfectly good piece of it just because of one little arachnid. The spider portion of the paper ended up being incorporated into the final blank leaf of gathering 3R and none of the previous owners opened the uncut top edge, perhaps seeing no reason to expose the spider any more than it already was.

The book, a mathematical work by Gerardus Vossius, was printed in Amsterdam in 1650 and the paper was likely manufactured in the same area, making this a Western European spider. It appears to be of the family Pholcidae, known informally as “cellar spiders.”

Like the ghostly handprint which cataloger Chloe Ottenhoff found in the paper of a book earlier this year (https://nonsolusblog.wordpress.com/2015/05/21/putting-the-hand-back-in-handpress/), the material presence of the spider makes book production from over 350 years ago seem like it happened just yesterday. SL 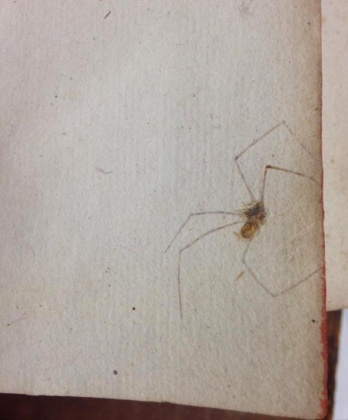